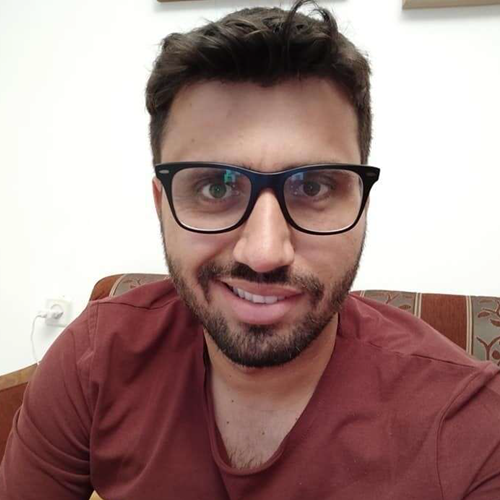 Arthur Lazarev was diagnosed with Huntington’s disease at the age of 23, which completely changed his outlook. After changing careers, he now devotes his life to education and raising awareness of the disease.

Arthur Lazarev was born in Russia and immigrated to Israel with his mother when he was 10 years old. Around two years after they came to Israel, his mother was diagnosed with Huntington’s disease, a degenerative genetic illness.

As a teenager, Arthur enlisted for military service, despite being an only child and despite the difficulties caused by his mother’s condition. He was later discharged with honors, in spite of the complications added by his mother’s illness. After leaving the military, he began studying Structural Engineering in the Technion (Israel Institute of Technology) for practical reasons, even though education had always been the subject he was most drawn to.

After being diagnosed with Huntington’s, he decided to change course and began devoting his life and all his efforts to education. Arthur started out as an instructor for Aharai, a non-profit organization, and continued to his next role as regional manager.

Arthur’s mother passed away on November 2019 after many years of courageous struggle. In the last two years of her life, Arthur had to face his own illness as well as his mother’s, and never stopped his work as an educator at Aharai. Arthur currently resides in a rented apartment in Acre (Akko), and faces the challenges of his disease along with this new dog, who lends her helping paw to assist him. Despite everything, Arthur’s message rings clear and optimistic: “I do all I can to live my life to the fullest, make sure you do the same!”

History with the Condition

When Arthur was 12 years old, his mother was diagnosed with Huntington’s disease, and he spent his entire teenage years coping with his mother’s condition, on top of having to adapt to his new life in Israel.

After being discharged from the army, Arthur began to notice involuntary movements which were reminiscent of his mother’s movements at the early stages of her disease. Due to his intense course of study at the Technion and possibly because he was reluctant to confirm his suspicions, Arthur decided not to get tested and tried to ignore the symptoms. At the age of 26, when his symptoms worsened and he began to have psychological problems, mostly depression, Arthur decided to get tested. The positive results didn’t come as a surprise, even though on average, 26 is considered a very young age for the outbreak of Huntington’s, which usually occurs when patients are between their 30s and 50s.

Huntington’s is a rare, degenerative disease that has a broad impact on a person's functional abilities and often results in movement, thinking (cognitive) and psychiatric disorders. Arthur is still active despite the worsening symptoms, and is going full steam ahead both as an educator and in his efforts to raise awareness of the disease.