Accepting My Fate with Huntington’s Disease After Surviving COVID-19 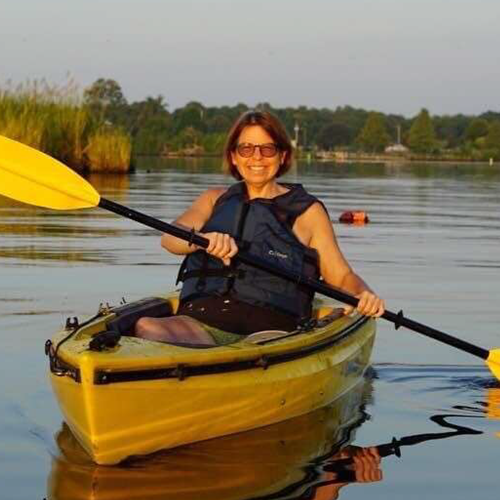 In this open and honest piece, Sarah Foster explains why she's happy to accept her fate with Huntington's disease after surviving coronavirus.

It has taken me more than ten years to develop a mental blueprint of how I am going to die from Huntington’s disease.

My moods will become so emotionally volatile that my children will avoid me altogether.

Speaking will become harder and harder until I won’t be able talk at all anymore.

I will stagger and stumble until I become confined in my body.

I will lose the ability to swallow, and likely end up with a feeding tube.

This cycle of disintegration is already at work, and it will manifest, unpredictably but assuredly, until I die.

Finding out what the future had in store for me

Even though I knew later onset Huntington’s disease was very much a possibility for me, growing up I was never ill. I broke no bones and escaped the agony of any accidental injuries.

I amassed decades of sobriety rather easily, considering my reluctant path towards surrender. I figured my genes were charmed somehow, so my results would certainly be negative.

Someone later pointed out that my own mother (who also had HD) had never broken a bone or missed a day of school. She had never been sick a day in her life, save for that one cold that took her out in the end.

Coming up with a plan

If magical thinking did me no favours, what did serve me well was time, therapy and soul searching. Finally, I came up with a plan. If there is one overarching truth I’ve learned from this whole process, it is that I cope better if I have a plan. So, I started making plans to support this hellish march towards my inevitable demise.

First, I participated in advocacy and research to feed my soul. Then, I found a job as a technical copy editor that allowed me to feel competent and be part of a team of ‘normal’ people. I also had a power of attorney put in place so my medical wishes are clear.

I am also doing all sorts of frontloading such as making music playlists to calm me when I am agitated. These are already coming in handy. During an emotional crisis I self-soothe much better with earphones. I have a years-long project of writing hidden messages of encouragement for the people I love, so they can come across them when I can no longer communicate.

My bucket list accomplishments to date have been satisfying. Every year I hike with my best friend in the mountains. I own a (sometimes) working convertible. I met Rufus Wainwright. I have had joyful visits with the four living sisters my father never knew he had.

On a daily basis, I try to keep myself present and nurture relationships with my family and friends however the day will permit.

Then COVID-19 came into all of our lives. I got infected, and it became the worst diagnosis I have ever received.

For about a week there, I thought the disease would take me out – quickly. And all of my carefully laid plans would have been for naught because this new illness would wipe me out.

I would never get a chance to be a grandma. I wouldn’t get to travel to Europe. No more yearly mountain hikes with my friend Nina. In an instant, time vanished and I saw the consolation sideshows on my twisted show boat ride to disintegration disappear.

Suddenly the fate I have complained and moaned about having to endure started sounding pretty good to me. I had often consoled myself with the notion that HD will probably take me out later in my life, if my path mirrored that of my ancestors.

But until I got seriously ill with coronavirus I had no sense of what an actual comfort the future I feared had become.

As much as I fear being killed by Huntington’s I have accepted it. It is my destiny, damn it. I have claimed it, and I want to be around to enjoy/ endure it. In fact, I think now I have come to think of it as wanting to enjoy what I will endure.

I know it’s not going to be a rosy path or an easy path. But it’s my path. I have accepted it, and that’s a good thing. I am all set to play by whatever unexpected rules HD decides to dole out to me.

I was sick with COVID-19 for three weeks.

A few days ago, my doctor meets me, wearing full PPE. I had parked outside her office, and she had come out to my truck. (The convertible is broken again.) Based on my lack of symptoms and quarantine time, she declares that I am now negative for COVID-19.

It was a negative result that I never planned for, and I still savour the diagnosis.

I am free, at least for now, from that blight, that usurper that sought to take my path from me. A path I’ve come to appreciate.

While coronavirus scared the hell out of me, it also adjusted my attitude: I’ll take the HD. I want to live until Huntington’s finally claims me.

6 Ways to Help Cope with Social Anxiety this Christmas