Water is the elixir of life: How to save 50 million gallons of water per year

Water is a precious resource around the globe, with India one of the hardest hit regions. A study by India’s Ministry of Water Resources reports that the country was experiencing the worst water crisis in its history, with around 200,000 people dying each year from inadequate access to clean water. 1

Asif Khan has made it his personal mission to save as much water as possible. “We should remember that water is the elixir of life, yet the underground water level around the world is decreasing rapidly due to over exploitation, hence water conservation becomes everyone’s responsibility,” he says.

In his role as Senior Manager of EHS (environment, health and safety) at Teva India's Gajraula plant, Khan is the mastermind behind a number of water-saving initiatives. “We were stopping any leaks and encouraging people to save water wherever they could, but we looked at what else we could do,” he explains.

“Here at the Teva Active Pharmaceutical Ingredients (API) plant at Gajraula Uttar Pradesh, we treat the effluent - the water left over from manufacturing processes – and use it for gardening purposes, for our flowers and lawns. We have cooling towers here which need a lot of raw water (untreated to remove bacteria and other contaminants), so we thought if we could use water we were treating for that too, it would be a big savings.”

The proposal put forward was to send treated effluent water to the on-site polishing plant, where water would become refined for use in the site's cooling towers – used to keep machinery at the right temperature during manufacturing. “The proposal went to site management and then was suggested to global management. We had to prove it would save water and we managed to convince them it would,” says Asif.

Since the start of 2016, when recycled water was used in cooling towers rather than raw water, until as recently as June 2018, an impressive 185,717 cubic meters (more than 49 million US gallons) of water has been saved at the Gajraula plant.

The reduction has delighted Asif, and he’s set his sights on planning further cuts, particularly as his own performance targets include a 10% reduction in water usage at the Teva Gajraula API Site each year. 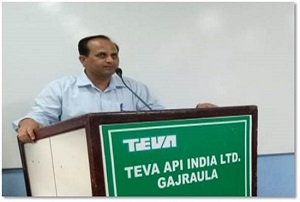 These efforts include holding training sessions for employees and their families on ways they can save water both at work and in the home. Asif and his team also carry out constant monitoring of the site so that even the tiniest of leaks will be fixed immediately.

Other water-saving initiatives include the installation of a rooftop rain barrel system and the adoption of natural freshwater ponds in nearby villages that will be maintained by Teva Gajraula and will allow water to go back into the earth.

One of the biggest future savings of water, however, will come from the replacement of raw water with recycled water for Clean-in-place (CIP) of equipment. “I stopped all use of raw water there and asked those responsible for cleaning to use recycled water instead,” says Asif. “It was a simple change and will help us to save more water in the future.”

He is grateful for Teva’s site management which has supported his efforts towards sustainability. “They always encourage us to do new things that protect nature.”

How Teva’s German Fleet is Reducing CO2 Emissions by 30%

How Teva’s German Fleet is Reducing CO2 Emissions by 30%

Saving Water and Sustaining the Environment

Saving Water and Sustaining the Environment

Keep on trucking: Germany roars ahead with natural gas-fueled vehicles

Keep on trucking: Germany roars ahead with natural gas-fueled vehicles

We Care About Our Planet – On Earth Day and Every Day

We Care About Our Planet – On Earth Day and Every Day
﻿ ﻿