An artist’s journey into patient safety

Explaining technical subjects in an easily-accessible manner isn’t the easiest of jobs, but it’s something the Teva team in Croatia grasped with both hands when designing a book on pharmacovigilance (PhV) 1.

The new book, A Journey Into Patient Safety, is a collaborative effort between 14 Teva employees in Zagreb that aims to explain the nuts and bolts of PhV to the everyday patient.

What really brings the book to life is its drawings, all of which were sketched by Mateja Raguž. Drawing is just a hobby for Mateja, Lead PhV Professional at Teva in Zagreb, but it’s something she’s been passionate about since she was a child. Mateja came up with all the ideas for the sketches following a series of meetings and brainstorming sessions with her colleagues. 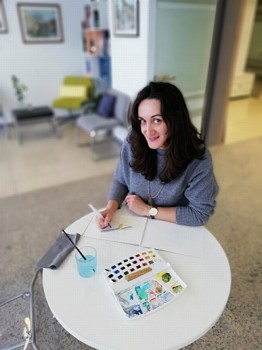 “The drawings were developed alongside the book’s text, so when one draft of a chapter had been completed I started to think about how I could bring it to life through sketches,” she explains. “I mainly did the drawings when everything else had been completed – I was sometimes drawing until way past midnight to ensure the sketches were ready for my colleagues to view the next day.”

Mateja wanted to depict the fact that PhV is about assessing the benefits and risks of medicines. PhV strives toward safer and more effective use of medicine, but all drugs carry a certain degree of risk – namely, side effects.

“In my drawings I use a wolf to depict potential risks and a little girl who is sometimes a curious investigator, sometimes a superhero and sometimes just a little girl. She represents PhV,” says Mateja. “It brings to mind Little Red Riding Hood, although in our book the wolf and the little girl make peace with each other, so we can say our story has a happy ending for all parties.”

The pill and the owl 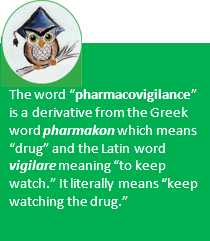 The third main character in the book is a friendly looking pill, who acts as the story’s narrator. He is depicted alongside pull-out boxes of information and questions to ensure the reader is picking up knowledge along the way.

On one page, we see the pill looking into a mirror with his colors reversed. It accompanies a section called, Generics vs innovator’s drugs: understanding the similarities and differences.
“This picture aims to show that generic and original drugs are basically the same,” says Mateja. “Patients often form the opinion that generics aren’t as effective as original drugs. The image shows that what is really important is the drug’s actual substance – not its name or appearance.”

The final character is an owl wearing a mortarboard, an academic’s hat. The owl is a symbol of knowledge – and has been since the time of ancient Greece. The bird accompanies “Did you know” sections in the book. These pull-out boxes include interesting bits of information that bring PhV to life, such as its history, relevant statistics and side-effects among famous people like Vincent van Gogh, the Dutch painter. 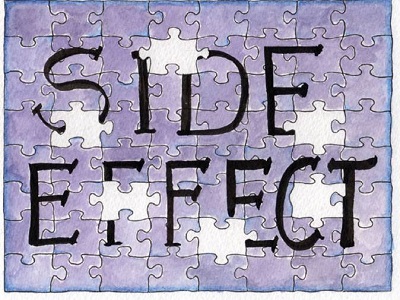 One of the book’s big areas of focus is explaining how PhV identifies and investigates side effects. On one page Mateja has drawn a jigsaw puzzle with some of the letters in “side effects” partially missing.
“The image really reflects what we are doing in PhV – collecting little pieces of evidence and creating a bigger picture to see if the side effects are connected to a certain drug,” she explains. “The hardest part of PhV is making this connection.”

In another image, we see the little girl using a magnifying glass to look at different sets of footprints. “In PhV we have many clues and we have to investigate them in order to find a solution,” says Mateja.

The last image in the book shows the wolf sitting on a seesaw, weighed down by books. This highlights all the work, reports and data that have gone into PhV, and how these are helping to fight the risks of medicines.

The team has received some fantastic feedback on the book. Vanesa Ivetić Tkalčević, Senior Pharmacovigilance Professional at Teva and the book’s editor, says she’s had emails from people congratulating them for doing a great job in making PhV interesting and accessible.
Lots of readers have said they want to share the book with their friends and family as well as students studying pharmacy or medicine.

“We wrote the book in English and the plan is to translate it into other languages as well, starting with Croatian,” says Vanesa. “It has been so well received that we also intend to distribute the book to people outside of Teva, enabling us to spread our knowledge of PhV to all patients.”
Most people working in the pharmaceutical industry know what pharmacovigilance is and how the process works, but among patients this knowledge is severely lacking. 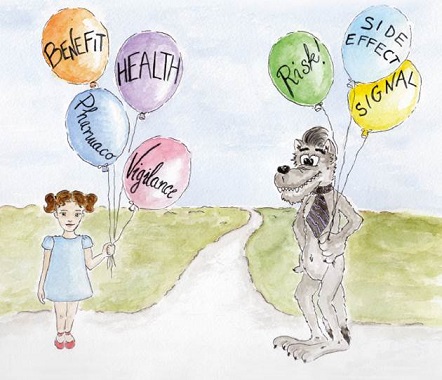 “PhV is a circle of interactions between healthcare providers, patients, pharmaceutical industries and medicine agencies,” emphasizes Vanesa. “Cooperation between all parties involved in PhV is very important – each party needs to know what PhV is and how it works for the system to be as perfect as it can be.”

Vanesa says PhV is all about improving patient safety, yet patients tend to be the weakest part of the circle. “We wanted to share our knowledge by writing a book for patients, who are at the center of drug safety and the PhV system.”

[1] Pharmacovigilance (abbreviated as PhV) is the practice of monitoring the adverse events of drugs in clinical trials and after they’ve been licensed for use, especially in order to identify previously undetected adverse reactions.

Behind the Scenes: Órla Barron and Peter Gargya

Behind the Scenes: Órla Barron and Peter Gargya

WeMake: How Did Teva Employees React When Patients Thanked Them for Their Work?

WeMake: How Did Teva Employees React When Patients Thanked Them for Their Work?

Teva goes to University: Collaborating with Academia to Improve the Lives of Patients

Teva goes to University: Collaborating with Academia to Improve the Lives of Patients
﻿ ﻿