Delivering medicine during the worst storm in 100 years

In February 2019, Peru was again hit by severe flooding, but Teva’s local distribution team was ready, thanks to some hard lessons learned during the previous storms, just two years before.

The water surge cut off large swathes of northern Peru, making it difficult to get much needed medicines and supplies through. In this most hostile of environments, how could the distribution team at Teva move 8.5 tons of supplies 800 miles north to where they were needed?

Fortunato (F): Peru has a population of around 30 million, with most people located along the coast.

The north of the country, where the storm was tracking, is home to roughly a third of the population. So we’re talking about 10 million people – or maybe more – suddenly cut off, with no access to essential supplies.

Teva drugs are among the most used in the country, so it was vital that they remained available in pharmacies.

Ursula (U): We were in shock, although less severe flooding happens roughly every 10 years, as part of the El Niño phenomenon.

In this case, we were suddenly faced with mass flooding in cities all along the coast. This was unprecedented, and there was no plan in place to deal with it.

We lost power, and parts of the big cities – even Lima – were under water for several hours.

It felt like a Hollywood disaster movie. The only thing we could do was keep calm and try to approach the problem as best we could. 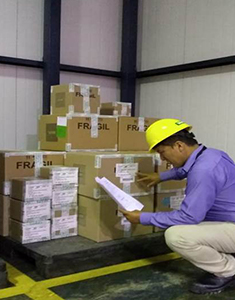 F: We had a crisis meeting with the entire team to explore ways to get medicines through to the north of the country, where they were needed.

We had ideas, but then we’d hear on the radio that the route had been cut by the rain. Then we’d change to another route, then that one would be cut.

U: The first question was: what do we do? We talked with the local and national governments, and people in various departments around Teva, from security to transportation.

We needed to make sure that whatever solution we arrived at was safe for our people, as well as for our medicines. We didn’t want to put our people or the medicines at risk.

F: Our first thought was to try and get our stuff there by air.

It’s a big distance – 800 miles north, and the principal highway was unusable. We contacted all the airlines and asked about the situation and they informed us that only humanitarian aid was being flown out of Lima.

U: So the airports weren’t an option.

The second choice was to take an alternative highway, but this was also impossible. The other way was by boat, but the ports in north Peru are used for cargo, the fishmeal industry, and others. They’re not really equipped for medicines.

F: Freight transportation by sea within the country was also not available at first. It was actually illegal, and the government has only recently approved a law to make it possible.

In 2017, we had to request special permission to use a northern port for our deliveries. 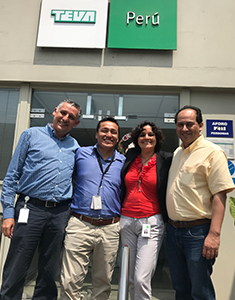 U: We coordinated with third-party logistics and logistic contacts in the ports in order to guarantee the operation. Afterwards, due to the emergency, the government agreed that we could use ports for our supplies.

In the end, the only viable port in the north of Peru was Salaverry. From there, we got the delivery on the road, and managed to get our products for distribution to Chiclayo.

F: The disaster was affecting us personally, as well as professionally.

My wife’s family is from Piura, the worst affected region in the north, and they live very close to the river. They called me one night to say that the river was rising outside their house and that they would have to leave.

I think that everyone in Peru has a family member or a friend who was affected. In the end, my niece came to stay with us for a month in Lima until the situation was settled.

U: People across Teva in Peru were affected. I also have family in the north of the country and they had never seen anything of this magnitude in their lives.

F: But some good things have come of this tragedy.

First of all, we learned the value of anticipation, of always being prepared. We now have contingency plans for an event like this if something similar ever happens again.

Everybody is now more alert to the power of the weather – that’s definitely the biggest lesson.

U: We also changed our style of management in the wake of these events in terms of logistics, planning and so on to ensure we maintain control and can move with a sense of urgency.

The Power of Our People: Inclusion and Diversity at Teva

The Power of Our People: Inclusion and Diversity at Teva