One intrepid Teva employee has conquered Africa’s tallest mountain to raise thousands of dollars for a charity battling the spread of neglected tropical diseases (NTDs) in the developing world.

Giancarlo Francese, Teva Access Head for Social Impact and Responsibility, was joined by 11 other adventurers, from the US, Switzerland and Tanzania, on the arduous hike up the forbidding Mount Kilimanjaro.

The 46-year-old climbed more than 19,000 feet/5895 meters to the summit of the ‘Roof of Africa’ to raise awareness for the END Fund, which aims to end the suffering caused by preventable NTDs.

Mount Kilimanjaro in Tanzania is the tallest free-standing mountain in the world and took Giancarlo and the team six days to ascend, with the climbers suffering from exhaustion and altitude sickness on the way. Before he left, Giancarlo had only climbed certain parts of the Swiss Alps - which he himself described as “a piece of cake” - but was inspired by the change he could make by trying to end treatable diseases in Africa and beyond.

These treatable and preventable illnesses affect more than 1.5bn impoverished people around the world, including 836m children. The parasitic and bacterial diseases cause acute pain, disfigurement and disability and can be prevented on some occasions by basic medication we take for granted in the west. 1

The task was something close to Giancarlo’s heart after a career working in developing countries fighting similar diseases and his longstanding ethos of helping others in need.

Giancarlo, who has been working at Teva since 2015, was invited by an external global health organisation, who knew him after a previous work history that included working for various NGO’s and the United Nations (UN). “It was a unique challenge I desperately wanted to be a part of and I was very pleased, firstly to have been invited, and secondly, that my boss agreed that I could take part,” Giancarlo said. “These issues have always been so important to me, I try to tell my daughter that the philosophy of life is to take care of others – even if you can only help one life.”

Giancarlo began training for the hike months before he left his home in Basel, Switzerland, working on resistance and equilibrium exercises every day. “I knew that climbing Mount Kilimanjaro was a big challenge, the mountain is very high and a lack of oxygen was a concern,” he stated. “I knew it would take lots of physical and mental fitness and my friends and family were very afraid, as I had never climbed before. They asked me if I was having a mid-life crisis, but I was still determined.”

The fundraising team set a target of $80,000, while Teva generously donated €10,000, which would all go to helping eliminate and control diseases such as trachoma and lymphatic filariasis (LF). 2 “It was a lot of money to raise, but it can do so much good especially when you think that for $86 you can pay for surgery to help prevent a person from losing their sight due to blinding trachoma,” Giancarlo said.

The father-of-one was introduced to the rest of the team when he arrived in Tanzania, and the adventurers immediately bonded before the hike began on June 29. Giancarlo said that he was happy to be joined by kindred spirits and the climbers became friends quickly, which was handy as the party had no contact with the outside world once they began their trek.

Giancarlo said the vision of Mount Kilimanjaro immediately stunned him. “When I first saw the mountain I realised just how big it was, I live in Switzerland so I’ve seen the Alps but this was something else,” he said.

Giancarlo recounted that the guides were always kind, reminding the adventurers to stay hydrated ‘sippy sippy’ and to go slowly ‘poli, poli’ and were quick with good advice when he became ill with altitude sickness on day three of the hike.

Every day the team faced new challenges and walked through rain forests, rocky ridges, a lava desert, and glaciers. “I had never seen so many stars, we saw Jupiter, Saturn, Mars as there was no light pollution and the air was so clean,” Giancarlo said.

On the day before they planned to climb the final leg the team went to bed early and awoke at 11.30pm to start the concluding ascent. Making the walk even tougher was the large snowfall, which the guides told Giancarlo was one of the thickest layers of snow and ice that they had ever seen.

“It was an amazing experience from the start, but the day of the summit was very, very special. You don’t walk a lot, just six hours but the experience was amazing,” said Giancarlo. “It was a spiritual experience. We were climbing with our headlamps, with the amazing guides helping us the entire way. At the summit we all cried at Stella Point because we were all so happy and when we made it to Uhuru Peak we all cried again.”

The descent was a lot quicker, just one day, and when they arrived at the bottom the team embarked on a new task – visiting two NTD programs supported by the END Fund.

The team were joined by Oscar Kaitaba, Program Officer, at Tanzania’s Ministry of Health who discussed the impact of NTD’s in the country and Edson Eliah Mwaipopo, Director of the Kilimanjaro Centre for Community Ophthalmology (KCCO) who spoke about their work on trachoma. The party visited Kilari Primary School in Siha District where they were welcomed by students and teachers who sang songs about hygiene education.

The team spoke to a young man with advanced stages of LF which included elephantiasis of his leg, which left Giancarlo despondent, especially as the disease can be treated. “Although he was young and looked strong physically one leg was huge, as he was suffering with elephantiasis,” said Giancarlo. “His life was obviously very tough and painful.

“Often sufferers cannot walk because shoes are too small for their large feet and people in Tanzania can often suffer from alienation and rejection from their villages with these symptoms. We were told that sometimes just being touched by a doctor can make them feel a little bit better.”

The team then visited a trachoma clinic where some locals from the Maasai ethnic group received a trichiasis surgery. For the men and women with trachoma this surgery helps them to see better and prevents further damage to their eyes, which can lead to blindness – costing as little as $86. 3 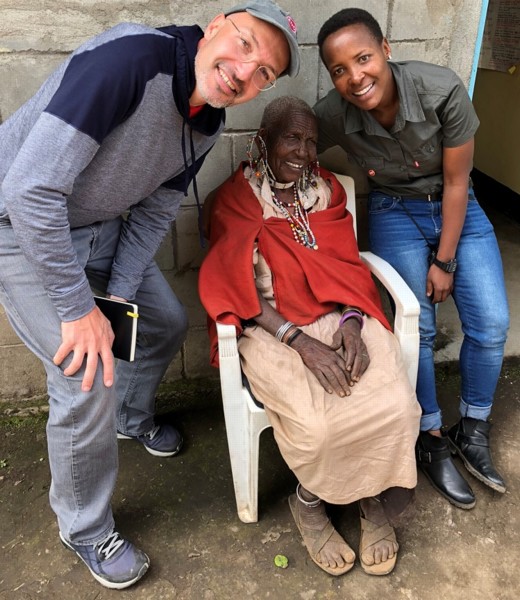 Of the 12 climbers, 11 completed the trip and Giancarlo said the whole experience was an intense, unique and a profoundly deep physical and mental endeavour. “Before starting the climb, a friend of mine told me I would discover a new perspective, and this is true,” Giancarlo said.

“This happened thanks not only to the summit achievement, but furthermore to our team spirit, and by the people, the doctors, the teachers and the students that we met there. People with humility and love, who are helping the neglected every day to ensure that soon these diseases will no longer be a concern.

“I am not superman for completing this, anyone with the right philosophy can help, and you do not necessarily need to go to Africa, you may have a neighbor that needs your help.”