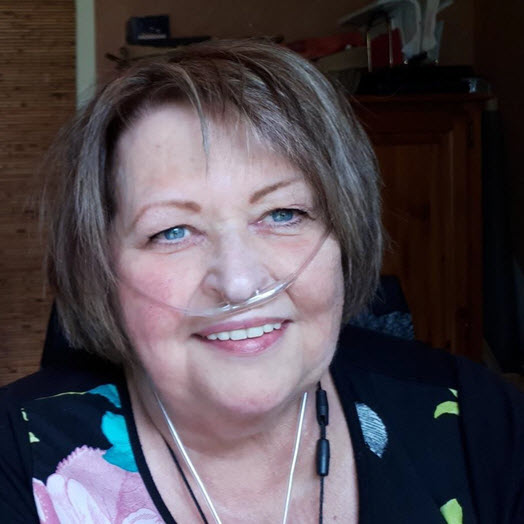 The signs began shortly after my 50th birthday. They were subtle, difficult to describe, and easily ignored.

I started finding it hard to walk to the corner to pick up my mail or to the parking lot to get my car, even though I was always a walker in the past.

My internal dialogue told me that I should mention these symptoms to my doctor, but life got in the way. I was busy being a wife and mother of three with a full-time job. I was also a pack-a- day smoker from the age of 14.

Just before my 60th birthday, I nearly died, and I was diagnosed with COPD. I often think about how much better my life would be now if I’d asked for help earlier.

Brushing aside the signs of COPD

Our family had recently suffered a huge loss due to a drunk driver. I was so tied up in grief that it became hard to function. My family grieved so hard that everywhere I looked there were tears. I didn’t have time for anything but the sadness that enveloped us.

All the time I smoked. I thought about quitting, but instead, I used my grief as a reason not to. It was an easy decision at the time.

That grief never left me, and my health continued to decline. I had no idea how sick I could get.

I had clever ways of disguising my symptoms without even realizing it. I paid for a parking space closer to work. I delegated tasks around the house and avoided stairs.

I threw myself into my job as a bookkeeper and became busier and busier, but the work was sedentary and hindered my ability to exercise.

I was also a college accounting instructor. I started to notice that it was hard to stand, and I needed to use a podium as I was lecturing my class. I needed something to lean against while I used all of my energy to speak on my feet.

I took breaks during lectures to catch my breath by asking students questions. Gradually I did more lecturing from a seated position. It was easier to talk and took less strain on my muscles. During work functions, I was an unwilling participant in interactive games. I was always looking for the closest chair.

Now, many years later, I know that muscle dysfunction is common in COPD. But back then I couldn’t explain my fatigue.

Without care, my symptoms continued to worsen

I became more fatigued as my life became more sedentary. My shortness of breath increased. I blamed it on my lack of activity and exercise. It was a catch-22.

My lungs continued to suffer. My health got worse. My cough developed into a hack. I produced so much mucus that I was never without a box of Kleenex.

I still hadn’t clued into the fact that I’d developed a chronic illness.

Reckoning a future with COPD

I had several bouts of pleurisy over the span of 10 years. This inflammation of lung tissue is more common in people with COPD.

I also had two bouts of pneumonia. Pneumonia is also common in people with COPD, and it can be deadly.

The second bout was about three years before my COPD diagnosis. It gave me my first glimpse of what my life would end up like.

I was so fatigued that I couldn’t get out of bed. I was very short of breath and so wheezy that I could be heard from the upstairs bedroom. My lungs were tight and full of mucus. I had a fever. I could barely walk across the room.

I called my doctor, who told me that he’d put me in the hospital if I didn’t get better in 3 days. I fought him on it – I didn’t want to be cooped up away from home.

That ended up being another huge mistake.

If I had gone to hospital then, a specialist could have done a spirometry test and diagnosed my COPD. My life might have been much different today.

Instead, my doctor ordered an action plan that included steroids and antibiotics. He apparently didn’t realize the severity of my illness either. My symptoms improved with medication, but it wasn’t a fix for the underlying cause.

Trying to make a change

I finally put my foot down and decided to give exercise a try. The problem was that I had no idea what I was doing.

I plunged into my new fitness routine full speed ahead. I didn’t know enough about COPD and exercise to start slowly. I had no idea how to breathe properly. I panted to get air in but didn’t know how to exhale properly. It was hard, but I forced myself to continue.

I became so short of breath that my heart felt like it was pounding out of my chest. Stopping to catch my breath was trying. I felt like I’d pass out. I continually leaned against walls and looked for places to sit down. I later saw that this was typical behavior among other COPD patients.

I pushed aside my symptoms for 9 years and 8 months. Finally, in October 2015, I asked my doctor to test my lungs and refer me to a specialist.

He gave me a sideway glance like I was trying to pull one over on him. He was surprised that I never talked to him about my symptoms before – so much so that he told me he had a hard time believing me.

I told him that I took six rest stops to get to his office due to breathlessness. He made the appointment right away.

I was diagnosed with stage 3 COPD. My doctors prescribed additional inhalers to my current medication regimen, and I scheduled an appointment with a pulmonary specialist in January 2019.

Before I could see that specialist, I suffered a sudden cardiac arrest on January 6, 2016. I would likely have been found dead on my kitchen floor if my kids hadn’t been at home that night.

I had no vital signs when the paramedics arrived. I lost vital signs two more times on the way to the hospital.

Doctors fought all night to get me stabilized as my family waited for word of my condition. I was placed in an induced coma and woke up 5 days later.

I spent 30 days in the intensive care unit due to muscle wasting and shortness of breath. I was discharged to pulmonary rehabilitation. I spent another 6 months attending sessions there.

After I was discharged from pulmonary rehab at the end of May 2016, I went back to work. I suffered another sudden cardiac arrest 9 days later. I spent another month in the hospital and had an internal cardiac defibrillator implanted in my chest.

The consequences of waiting to get help

I now have heart failure because I allowed my COPD to get to such an advanced stage before I acted. COPD exacerbations add to the stress on your heart, making it have to pump harder and faster because the lungs aren’t working well enough to oxygenate blood. Not getting proper care for COPD can increase the risk of developing cardiovascular disease like heart failure.

This is the deadly combination that caused my sudden cardiac arrests and finally forced me to start investigating my COPD. My doctors have told me to always wear my supplemental oxygen to give my heart a rest.

Doctors can medicate me. But there is no cure for either COPD or heart failure.

Since my diagnosis, I’ve been taking care of myself. I quit smoking, I exercise, and I eat a healthy diet. I restrict the amount of fluids I consume because of heart failure. I give myself lots of downtime and rest as needed.

COPD is often missed in the early stages because people don’t know what to look for. See a doctor right away if you’re experiencing any of the following signs of COPD:

Early detection and treatment are key to slowing the progression of the disease and control symptoms. People can live for many years with medications, oxygen therapy, respiratory rehabilitation, and social support. The earlier your diagnosis, the earlier you can learn how to manage your COPD so you can live a better life.

For more information on how to manage COPD, reach out to your doctor or healthcare team.

7 Tips to Get a Better Night’s Sleep with COPD