The “Pride” Employee Resource Group (ERG) at Teva is one of eight ERGs that make up the Teva Inclusion Network, and is a powerful example of great accomplishments that can be achieved with simple changes.

Teva now has one of the most LGBTQ inclusive policies in North America, says Brent Weakley, regional sales manager in Teva’s Neuroscience unit and Co-Chair of Teva’s Pride ERG for LGBT community and allies.

“Some of the things we have done include changing the family medical leave to have no gender bias, so that men have the same leave time as women. This is useful if two men were to adopt a baby or something like that. We were also able to have transgender health benefits included in the health benefits package for North America. So both surgical and non-surgical benefits that were not covered by Teva in the past, now are,” says Weakley.

In fact, the work done by Teva’s Pride ERG has been so impactful, that Pride Executive Council Member Dr. Joshua Cohen, who is Teva’s Senior Director in Therapeutic Area Lead Migraine & Headache, was asked to present a summary of the route Teva had taken to achieve its place in the Corporate Equality Index at the American Medical Association’s annual meeting.

One of the many achievements of Teva’s Pride ERG was getting the company listed as having achieved 100% on the Human Rights Campaign Foundation Corporate Equality Index. This was achieved by securing the extra benefits for employees in North America, such as transgender health benefits, and by collaborating closely with the HR team. “We worked with HR to make sure we have the most inclusive policies possible.”

Teva Employees in North America voluntarily join ERGs based on shared characteristics or life experiences, creating wider channels for networking, outreach, career development and business innovation. One Pride ERG member said: “It's wonderful to feel safe, included, and supported at work. Many people are not so fortunate with their employers. This is another reason I'm proud to work at Teva.”

Dr. Cohen came up with the idea to approach the Trevor Project to present a talk last year for Teva colleagues about the bullying many LGBTQ youth face. The Trevor Project is a mental health hotline for LGBTQ young people that aims to help children with suicidal thoughts, or those who are at risk of self-harm. Dr. Cohen had already volunteered with the Trevor Project, and had a relationship with them, so a partnership with this group was a good option for Teva, explains Weakley. This event, alongside other work done by the group, also contributed to the score received from the Human Rights Campaign Foundation. 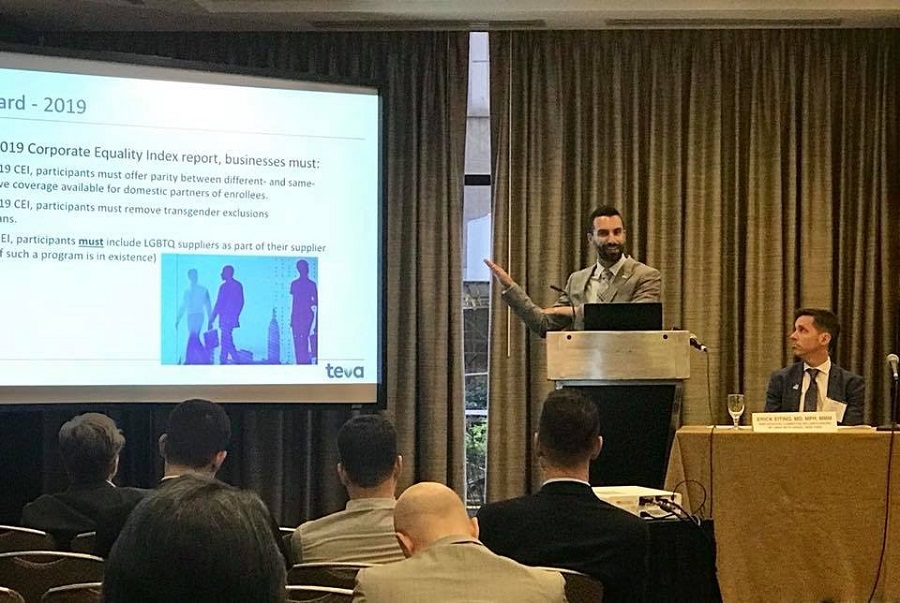 Dr. Jeffrey Fishberger is a psychiatrist who works at the Trevor Project who spoke to colleagues at Teva about the organization’s work, and about how they should deal with young people who may be bullied.

“He talked about bullying and how to recognize if your child is getting bullied, and coaching your kids to not be bullies. He also covered how to deal with that as a parent or aunt or an uncle, or as someone who has a relationship with the child who might be bullied,” Weakley says. “Of course it had a bit more of a focus on LGBTQ kids because that is the mission of the Trevor Project, but the program we put on was really generalized for all kids as it is a common thing no matter who you are.”

Aims of the group

Though the successes of the Pride ERG so far have been myriad, the aim of the group is quite simple, says Weakley: “Our goal is to make people feel welcomed and included at Teva regardless of their gender identity or sexual orientation. Though Pride is just one of many ERGs at Teva, he is clear on the benefits of this goal, for everyone. “Promoting inclusive policies in the organization is very important for recruitment and retaining good talent,” he says.

Weakley considers the changes that have occurred to the benefits package one of the most effective ways of achieving that inclusivity, praising his colleagues in HR for their support: “Our HR teams have been brilliant to work with as we attained everything that we asked for.”

Looking to the future, Weakley hopes that the successes of the group so far will encourage more people to take part, and allow the group to continue its successful run of accomplishments.